Who Is Black Hawk? 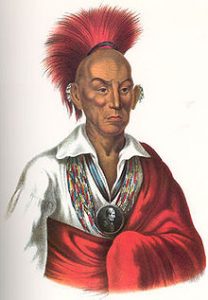 Black Hawk, whose Native American name was Ma-ka-tai-me-she-kia-kiak was born in 1767 in Rock Island, Illinois. He was a leader of many Native American tribes such as Sauk, Fox, Kickapoo, and Ho-Chunk. He is most famously known for defying the United States Government after 50 million acres of Native American land were promised to the government from the Treaty of St. Louis in 1804. His decision led to the Black Hawk War in 1832.

Black Hawk did not appreciate white men settling on his land and opted to side with the British during the War of 1812 in hopes of preventing more settlers encroaching on his territory. After being forced to move to Iowa, he banded together with a group of roughly 1000 Native Americans and attempted to recross the Mississippi River to settle back into Illinois, prompting Governor John Renolds to call in a militia.

At first, Black Hawk’s band was able to hold their own, especially during the Battle of Stillman’s Run. As weeks went on, the Native Americans did not fare well. Aid from other tribes as well as from the British never arrived. They had a shortage of food and supplies. Black Hawk and his men retreated north but most of his men were killed in the final battle at Bad Axe River in what is now Wisconsin. Black Hawk managed to escape but surrendered. The government’s treatment of the Native Americans during this war was so impactful, most Native American moved westward leaving the Northwest Territory completely in control of settlers.

During this time Black Hawk remained in government custody. They were paraded around the country from St. Louis all the way to Washington D.C. The trip home included stops in Baltimore, Philadelphia and New York City. He finally made it back home but spent the last five years of his life out of the public eye. He died in 1838 in his home near Des Moines, Iowa.