What Is The Devil’s Backbone? 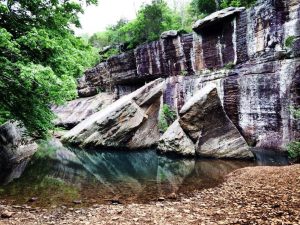 Located in Grand Tower, Illinois, the Devil’s Backbone is a half mile ride of limestone that runs along the eastern shore of the Mississippi River. At the north edge is another landmark called The Devil’s  Bake Oven containing what is called Tower Rock. It is a 100-foot rock that stands on the end of the Missippi River. This landmark has a rich cultural history and has been a popular tourist attraction to anyone visiting the area.

When French explorers, Louis Jolliet and Jacque Marquette were first exploring the Mississippi River they noted a large rock, that is now known as Tower Rock.This area of the Mississippi was particularly treacherous and many a sailor would die around this ridge. This gave the area a sinister feel causing Native Americans to associate this stretch of the river with evil spirits. When white settlers infiltrated the land, they agreed with the Native Americans naming this area after the devil.

Many pirates would hide out in these parts and wait for victims. In the early 1800s, the amount of crime skyrocketed in this area causing the US Calvrymen to settle in the area to prevent pirates from attacking. However, their efforts were futile because the pirates just moved to a different stretch of the river. As the industrial revolution began to happen in the United States, the site became home to an Iron Factory and many houses for the leaders of the company. Some of the old foundations of the homes can be seen today and are allegedly haunted (or just the same evil spirits the Native Americans saw).

If you plan on visiting Southernmost Illinois and are interested in the supernatural, then The Devil’s Backbone and Bake Oven are a must see.