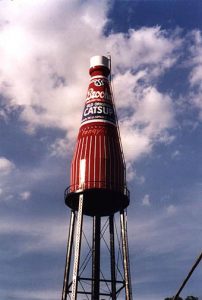 Just when you didn’t think Southernmost Illinois couldn’t be any cooler, you were wrong. Located south of downtown Collinsville on Route 159, stands the 170-foot condiment container. It is, in fact, the World’s Largest Catsup Bottle. However, it doesn’t hold catsup or as others call it ketchup. The bottle itself is actually the outside structure of a water tower that was constructed in 1949. It was built by the W.E. Caldwell Company for G.S. Suppiger catsup bottling plant.

Now a popular tourist attraction, the bottle was almost demolished in 1995 but was saved by the locals in the Catsup Bottle Preservation Group. Through their efforts in August 2002, the catsup bottle became listed on the National Register of Historic Places.

The bottle is a 170-foot replica of Brook’s Old Original Tangy catsup bottle. Everett and Elgin Brooks bought the canning and packing company in 1907. They eventually sold the plant to American Cone and Pretzel Company but they kept the Brooks brand name. Throughout the depression the company was successful. Throughout the 40s and 50s, Brooks was one of the highest sellers of catsup in America. In fact, you can still buy some of the Brooks ketchup: www.brookscatsup.com