The History of Scott Air Force Base 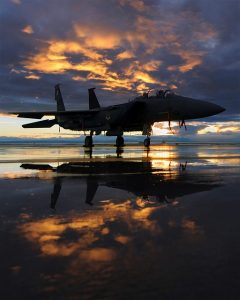 Originally established as an Air Service training camp after the United States entered World War I in 1917, Scott Air Force Base is now a United States Air Force base. Located in St. Clair County, Illinois, near Belleville (20 miles from St. Louis), the base currently employs 13,000 people — 5,100 civilians, 5,500 active-duty Air Force personnel, and 2,400 members of the Air National Guard and Reservists. The base is also home to three, soon to be five, cybersecurity squadrons. In addition, the airfield is used by  Allegiant Air for some civilian aircraft during which time it is referred to as MidAmerica St. Louis Airport.

The Beginning of Scott Field

In 1917, Secretary of War Newton Baker, coordinated with an aerial expert, the St. Louis Chamber of Commerce, and directors of the Greater Belleville Board of Trade to lease 624 acres of land on which the Air Service training camp could be created. From then on, since the need was immediate, everything moved at breathtaking speed. The government gave construction company 60 days to erect approximately 60 buildings, lay a mile-long railroad spur, and to level off an airfield with a 1,600 foot landing circle! Construction was already underway when the government announced that the base would be named to honor Corporal Frank S. Scott, the first enlisted service member to be killed in an aviation crash.

The Period Between World Wars

The field’s future looked uncertain after the end of World War I. It briefly functioned as a storage site for demobilized equipment, but then, in 1919, the War Department purchased Scott Field for $119,285, enticed by its central location and irresistible price. In 1921, Scott Field became a lighter-than-air (LTA) station as it accepted the transfer of an Army Balloon and Airship School from Texas to its acreage, building a new airship hangar to accommodate the transferred aircraft. The new hangar, three blocks long, one block wide and 15 stories high, was believed capable of holding 100,000 men — at the time practically the number of men in the entire U.S. Army!

Scott Field After the Outbreak of World War II

With the opening of its Radio School in 1940, Scott Field returned to its former role as a training installation. Its primary purpose during the Second World War was to train radio operators to become, as its slogan boasted, “the best damned radio operators in the world!” Known as “the Eyes and Ears of the Army Air Force,” Scott’s graduates flew aircraft and operated command posts wherever U.S. troops were fighting. In 1947, well after the end of the war, the Army Air Force was renamed the United States Air Force so, in 1948, Scott Field officially became Scott Air Force Base.