A Brief History Of The Mormon Trail 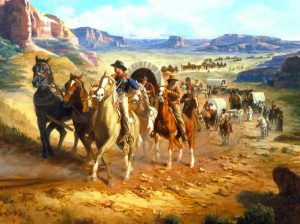 The history of the Mormon Church goes back to the 1800’s and Joseph Smith. While his flock originated in the east, they moved westward, establishing settlements as they went. After Smith passed away Brigham Young took over and began what would eventually be known as the Mormon Pioneer National Historic Trail.

This trail is 1300 miles long and spans from Nauvoo, Illinois, to Salt Lake City, Utah. At the time it was established, Nauvoo had been the main settlement of the Mormons. However, Young set out to to what is now known as Salt Lake City. Along the way they had some folks stay in various locations and set up establishments.

For more than two decades men and women traveled back and forth on the trail as their numbers grew through multiple conversions. They had to escape the frigid winters but had yet to establish their new home in Utah at first.

The trail is also known for the Mormon handcart pioneers who developed a method for getting more folks transported safely. At that time many people simply couldn’t afford to purchase the horses and carts necessary for the long trip. However, these handcarts allowed for people to still make the trek, even if they had limited resources.

These carts were constructed of wood and could be pushed or pulled by people. They could carry provisions for the ride on the trail and a few personal items for the family. While not as ideal as a large covered cart and wagon train being pulled by fine horses, these innovative carts allowed thousands of Mormons to make the trip to Salt Lake City using the carts.

Along the way there were some struggles along the Mormon Trail, including a harsh weather winter incident in what is now Casper, Wyoming. Two parties exhausted their food supplies before rescue workers were able to find them. More than 200 faithful followers were lost as a result.

Although the trail was very popular for many years, it eventually became obsolete. In 1869, the First Transcontinental Railroad was completed, opening the way for inexpensive and dependable travel for people interested in going either direction.

Today, many of the sites along the Mormon Trail have historical observance points and information regarding their part in this important event in American history. It is a fascinating look at how Europeans expanded westward in pursuit of their own search for answers and freedom.

Brought to you by: https://cramplawfirm.com/